The Timberline Mountain Ski Area in Canaan Valley, WV, opened for a Preview Weekend on November 27-28, 2021. As part of the Preview Weekend, holders of Season passes were invited to bring a friend to join them for a free day of skiing. My buddy John Lewandoski is a pass holder and he put me in touch for a free day on Sunday November 28th. Thanks Jean! It was my first time skiing at Timberline Mountain since the new owners took over the ski area in 2019. I had a great time.

This is old news for those who skied on Timberline last year, but I found the new lifts and improved snowmaking capabilities to be a game-changer. Friends tell me that the new six-passenger high-speed chair cuts the trip to the top from about 13 minutes to 4.5 minutes. Compared to the old ski lifts, the amount of ski / vertical you can now save during a visit is similar to night and day. Timberline Mountain has always had great terrain, but it wasn’t the best place to maximize your trail mileage. Sunday I’m pretty sure I broke a record for the most vertical I’ve skied on a personal first day of the season.

Since the Perfect family bought Timberline Mountain in 2019, they have continuously worked on improving the snow infrastructure, and it looks like this foresight will really pay off for the 2021-22 season! In about three days last week, they went from dirt to 40% of the open ski area, including four beautiful top-to-bottom runs for the preview weekend. The snow quality on these trails (Salamander, White Lightening, Thunder Struck, and Dew Drop) was good and held up well throughout the day on Sunday. Given this rate of progress, the entire trail system should be open within a week or two with just a little cooperation from Mother Nature.

The six-pack can gobble up a crowd, but it wasn’t really light crowd tested on Sunday. The six-pack and quad chair feature a crisp paint scheme that reflects the University of West Virginia gold and blue colors. Both chairs come from Doppelmayr, one of the leading lift construction companies in Europe.

Locals and season ticket holders came for the preview weekend. Who doesn’t like the chance to ski in November? White Lightning was the steepest open trail on Sunday. I expect the Black Diamond Drop and Off the Wall tracks to open up soon. 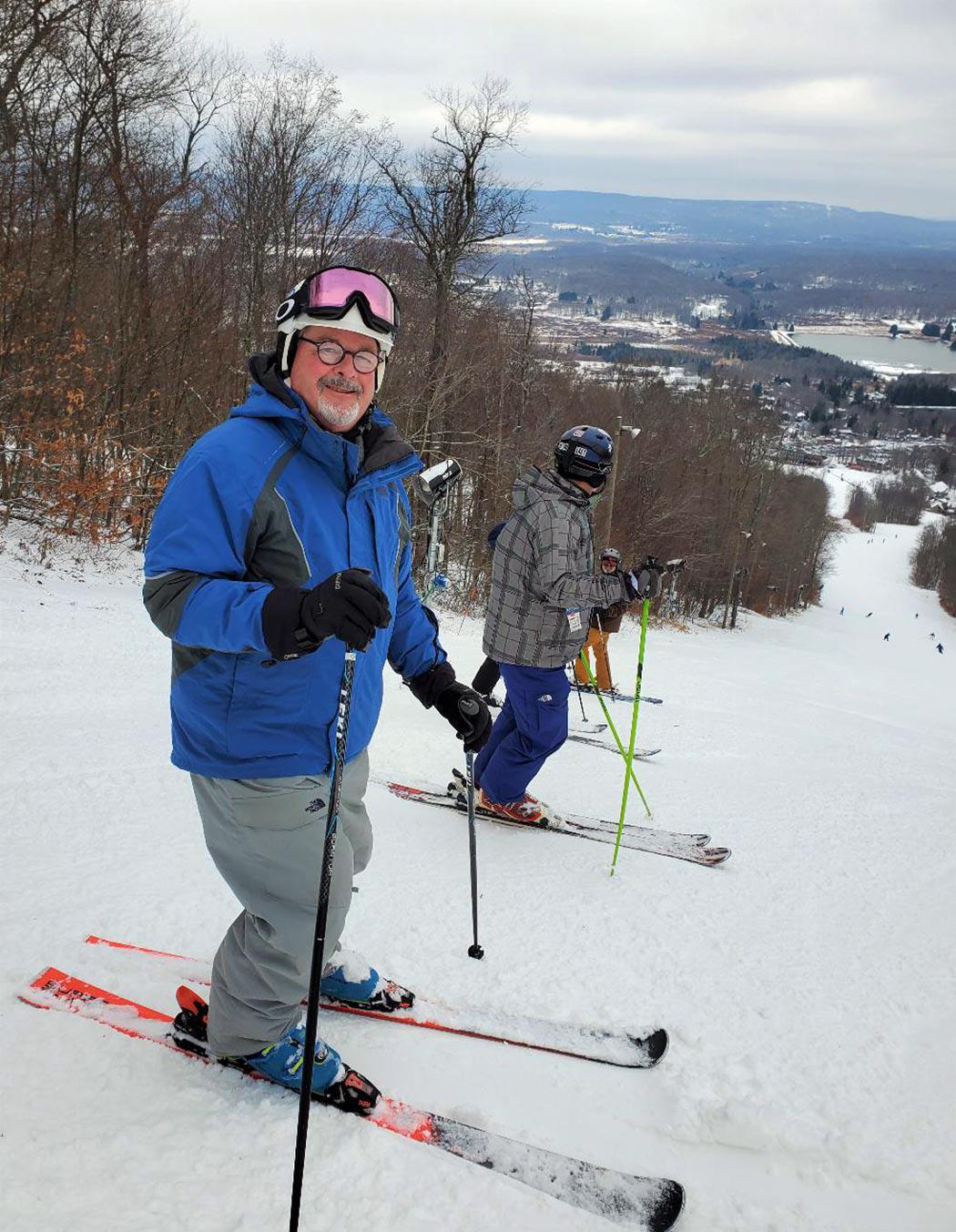 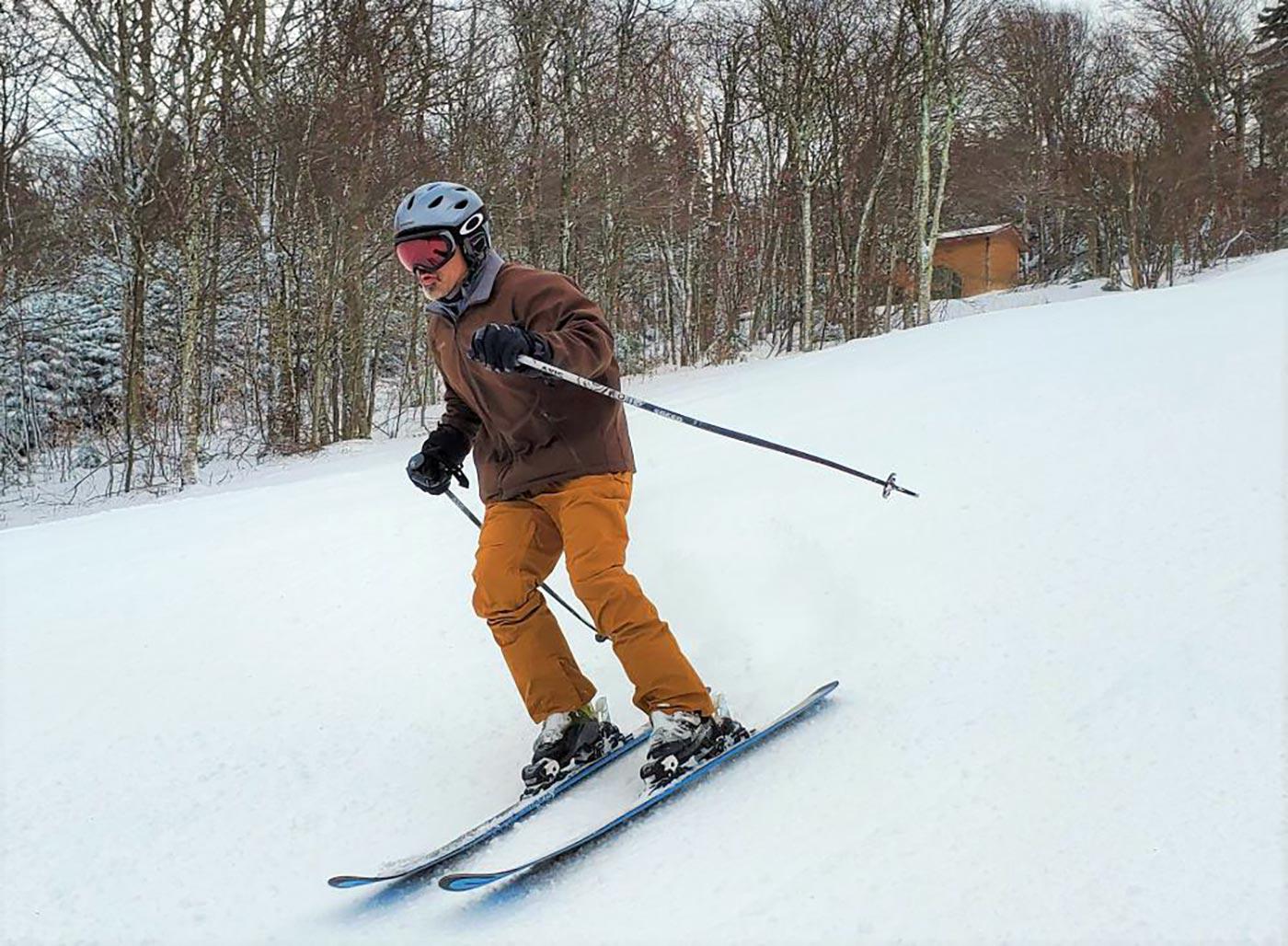 A long-time member of the DCSki Forum, wgo is starting its ski season on the right foot. Photo by Jim Kenney.

The instructors from the Timberline Mountain ski school took advantage of the preview weekend to do practical training. I skied from 10 a.m. to 4 p.m. and they were there most of the time. I don’t think the temperatures ever hit 40 degrees, but in the afternoon the sun came out. The Dew Drop trail was the perfect spot for gentle late afternoon turns in the friendly man-made snow. 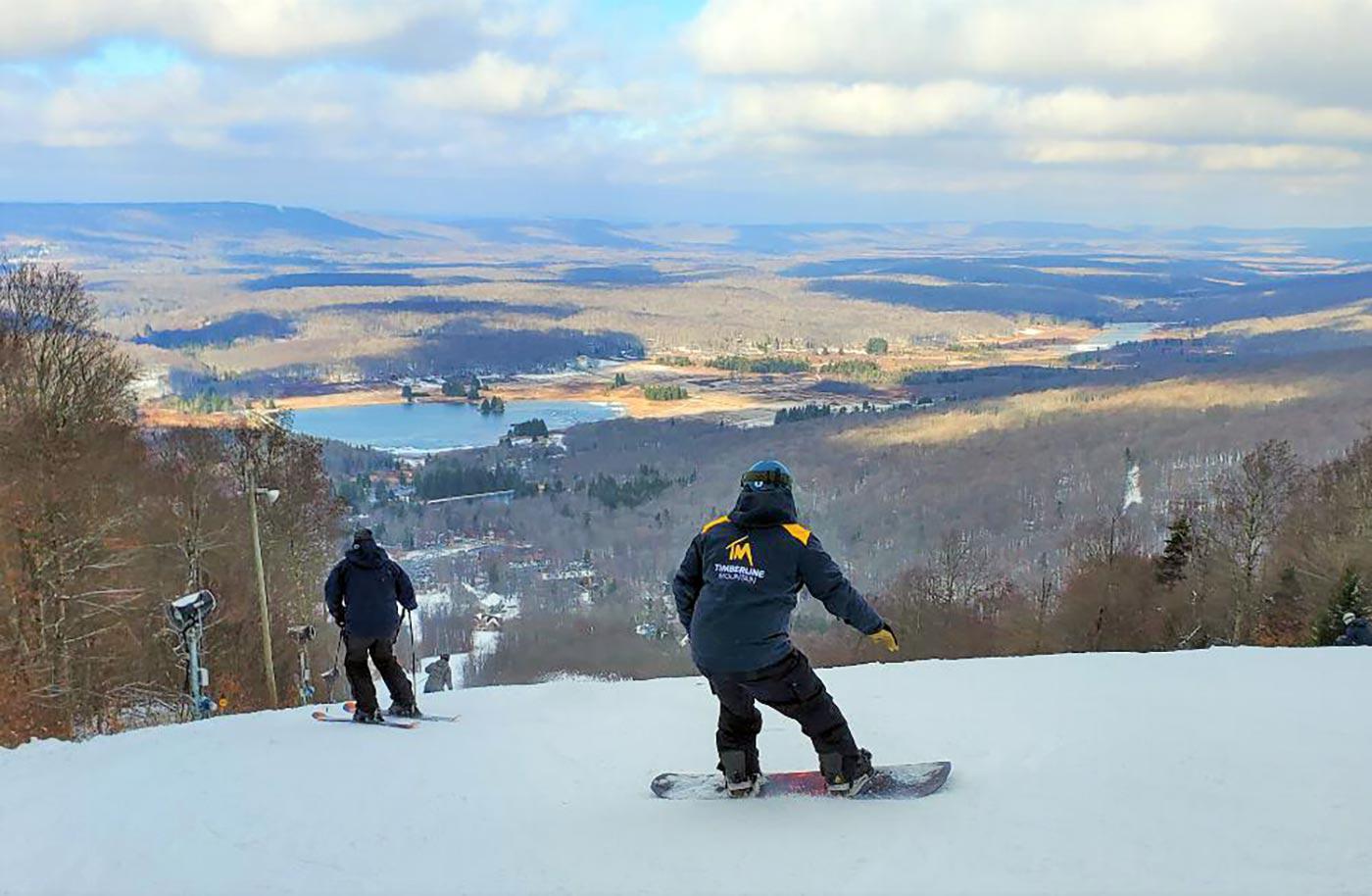 A Timberline Mountain snowboard instructor goes surfing early in the season with Spruce Island Lake in the background. Photo by Jim Kenney. 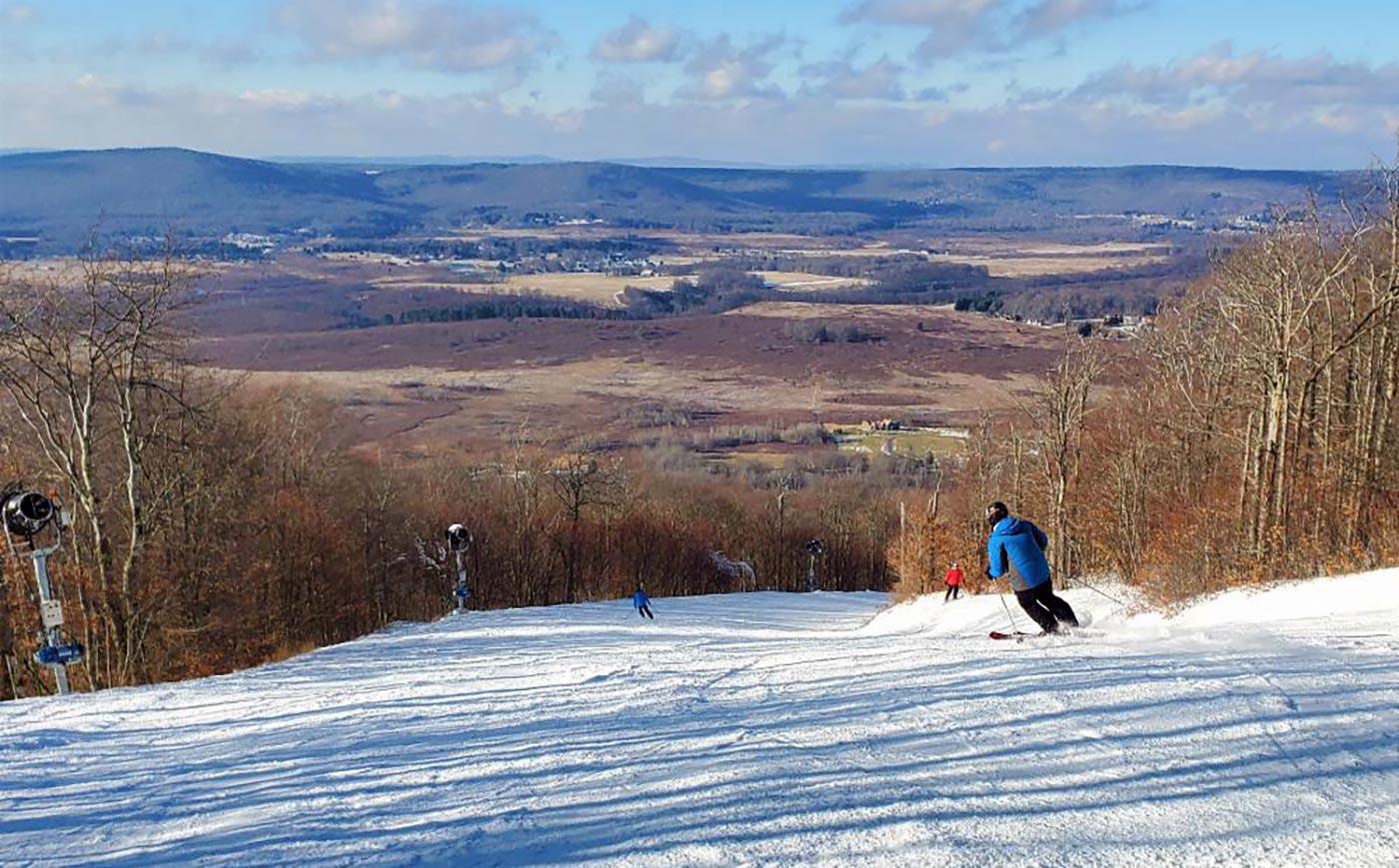 In addition to the lift and snowmaking improvements at Timberline Mountain, the base lodge has been completely renovated and updated, including a significant expansion in square footage. An exterior paint job makes the building look better and brighter than it has been in decades. There was even a couple of inches of natural snow over the weekend to whitewash the valley. Timberline Mountain is ready for the holidays! 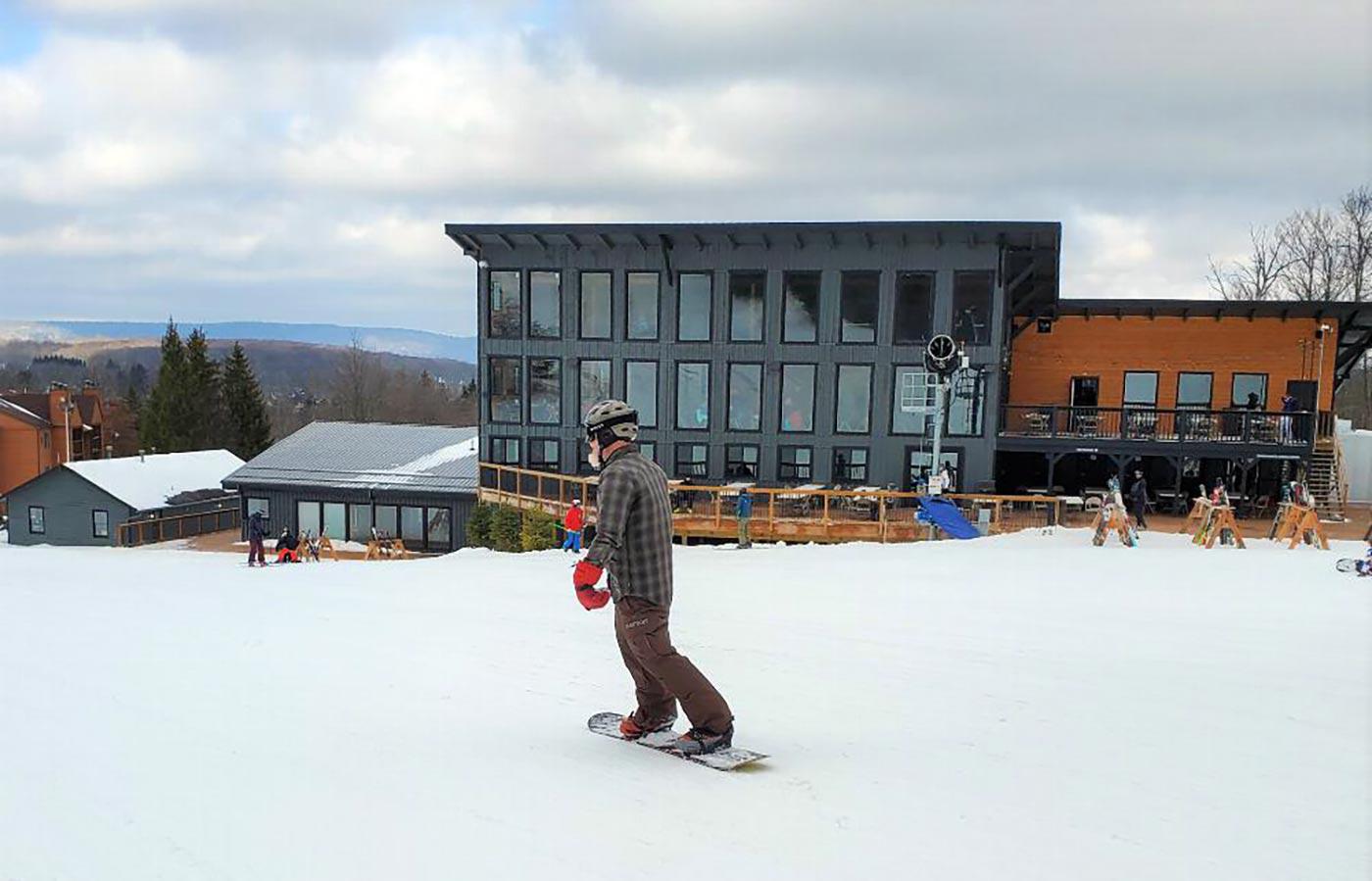 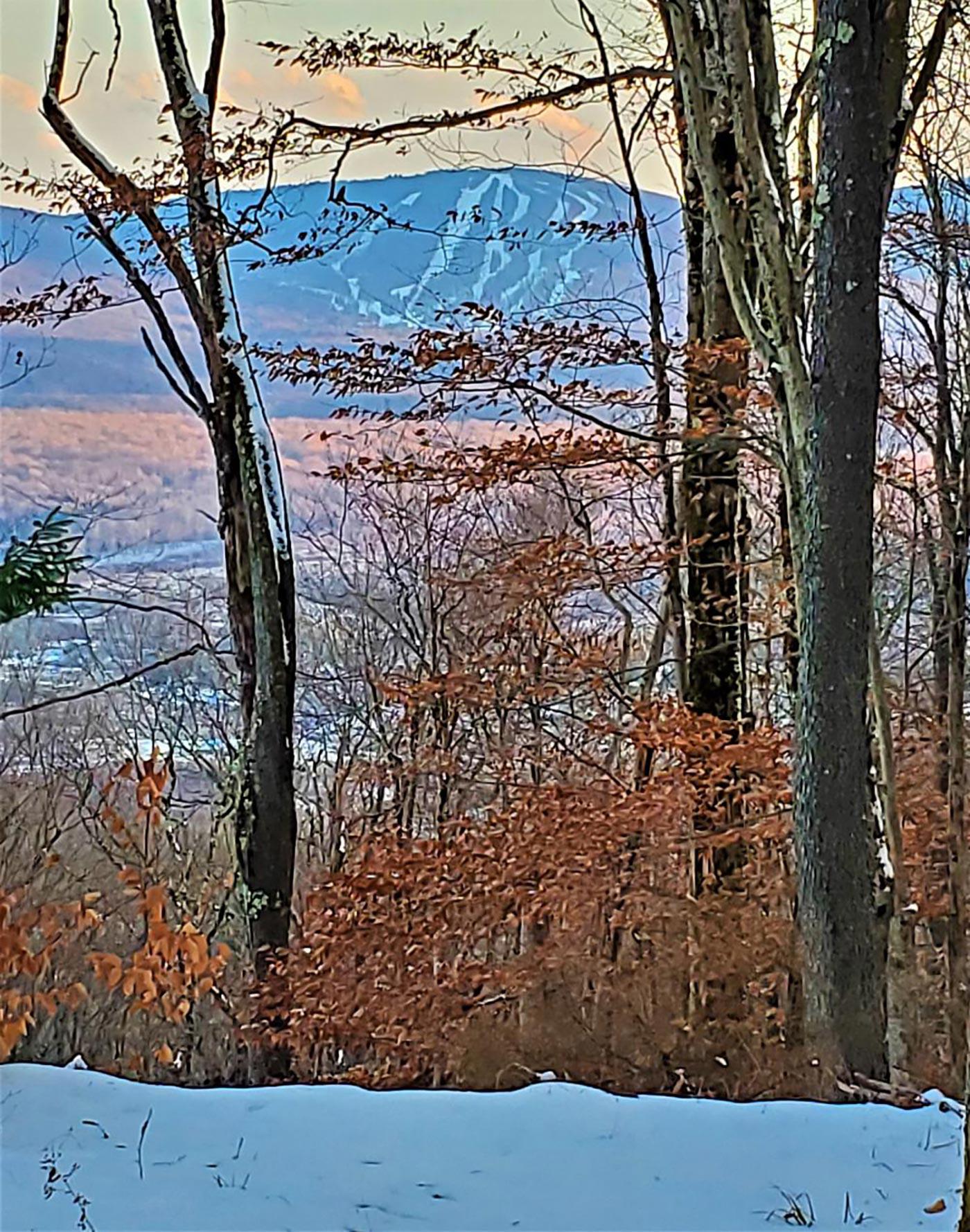 If the preview weekend is any indication, this should be a great season to visit Timberline Mountain in West Virginia. The mountain will have its official opening on December 3, 2021. Better to develop these skis and boards!

There are no reader comments on this article yet.

Boundaries commission report must be made public and state reestablished before…